Tramontin gondolas, the “Ferrari” of the water

‘Once again black, steps that slipped into the black water, on which floated a long black boat, terrible, with a black box at its centre: we boarded the gondola by night.’ Vasilij Kandinsky

This extract is from “Looks on the past”, in which the artist Vassily Kandinsky recounts the emotion he felt on his first visit to Venice, the magic of the blackness of the gondolas in the darkness of the water at night.

Gondolas are the only boats in the world with a black covering. 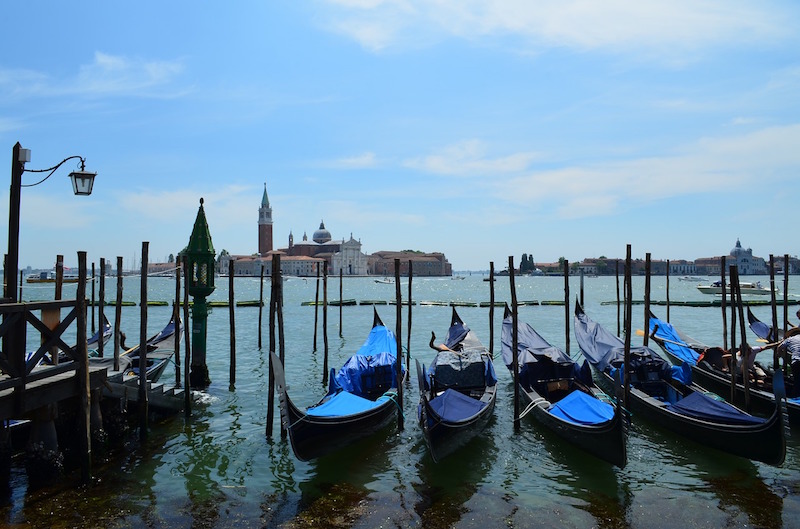 They have always been black by decree of the doges, there are 433 gondolas in Venice today with as many licensed gondoliers, others are privately owned or in museums.  Gondolas are still made by hand, in the traditional boatyards (squeri) and this is the time to see them being created: new ones are constucted in winter, between spring and autumn repairs and maintenance are undertaken.  Of the three remaining traditional boatyards in Venice, the oldest is Roberto Tramontin’s, in Campo Ognissanti, founded 2nd February 1884 it has been in the same family ever since. Always a gondola-maker Roberto learnt his trade from his father and grandfather, who in turn had learnt from their family. 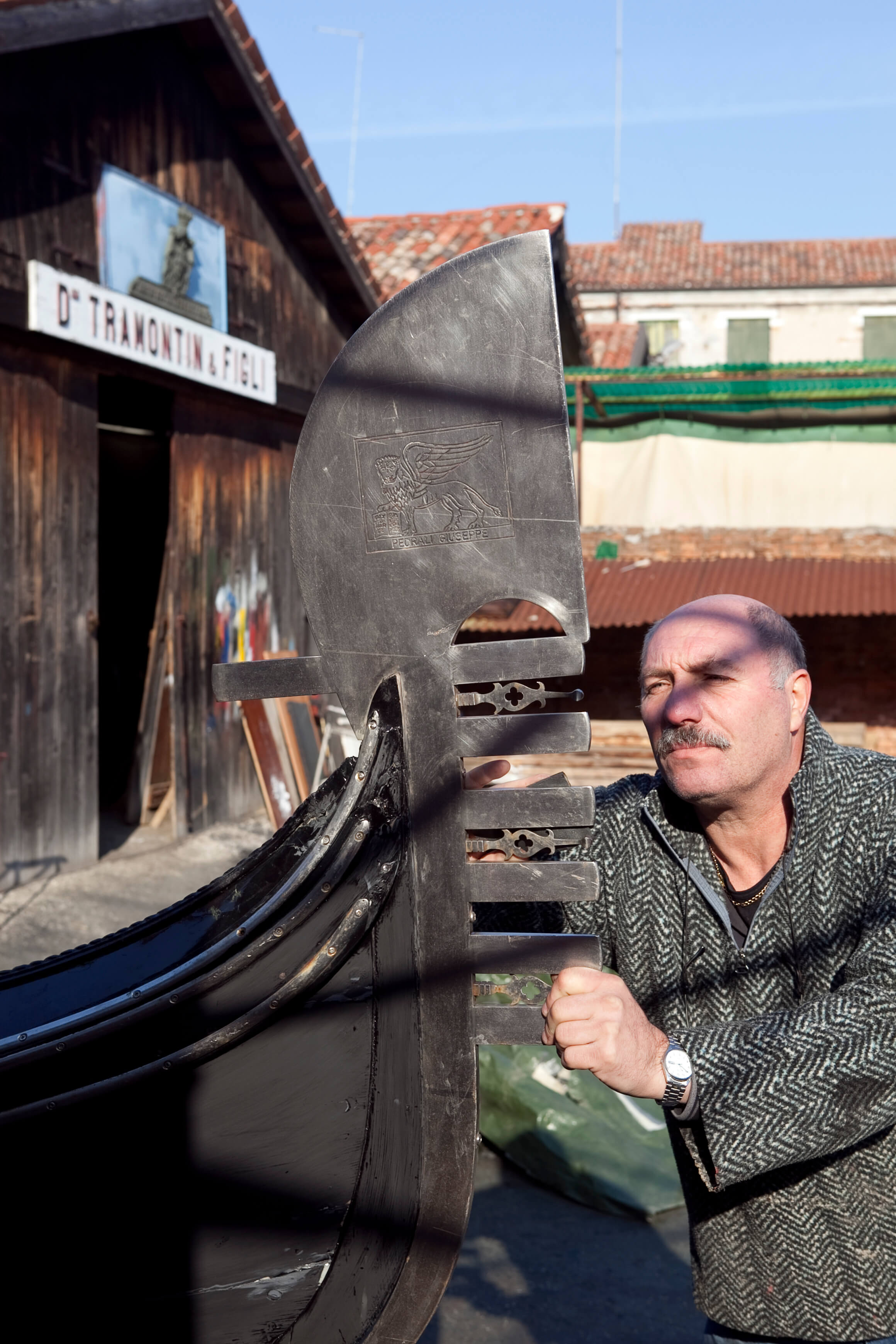 You need knowledge and great ability to construct a gondola.  “Everything starts in the heart, then arrives in the head and then the hands” says Roberto.  There are 8 types of wood used, chiefly durmast for the side, carved from a single 12 metre trunk. Then lime, walnut, mahogany, pine for the base of the seat, cherry, larch for the gondolier’s platform and elm.  The wooden planks are stored for many years to season (a year for each centimetre) and then curved knowingly over a live flame, and constructed in the boatyard. 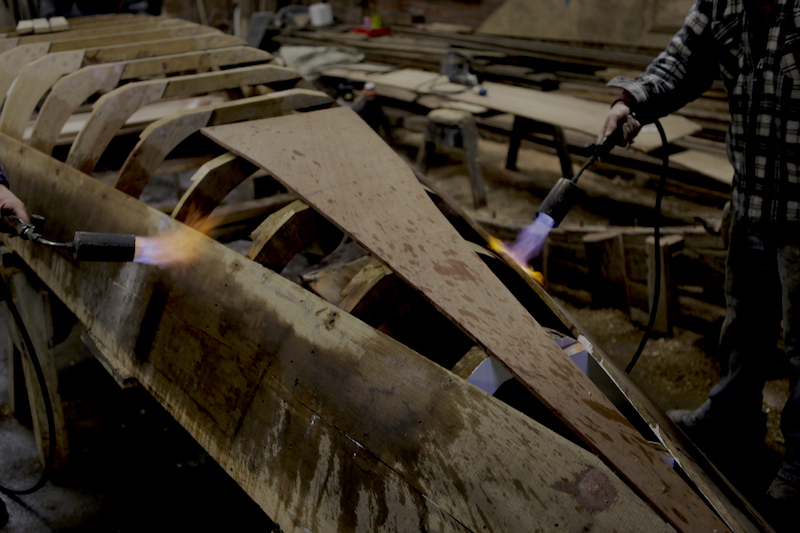 Roberto arrived in the boatyard when he was 16 years old and constructed his first gondola when he was 24: he had to wait a long time to see his first offspring go into the water.  Tramontin gondolas are part of the history of Venice.  One of these gondolas can be found at the Palazzo Ducale and was construted by Roberto’s grandfather for the king of Italy.  Who are today’s customers?  The gondoliers. “A few days ago an artist asked me for a gondola for a performance, to paint and keep it as a piece of art; but there is less money these days and the eccentric requests have diminished.  There was a time when Arabs from Qatar would phone and make absurd requests, such as an electric motor.  Another asked me for a gondola with a bathroom“. 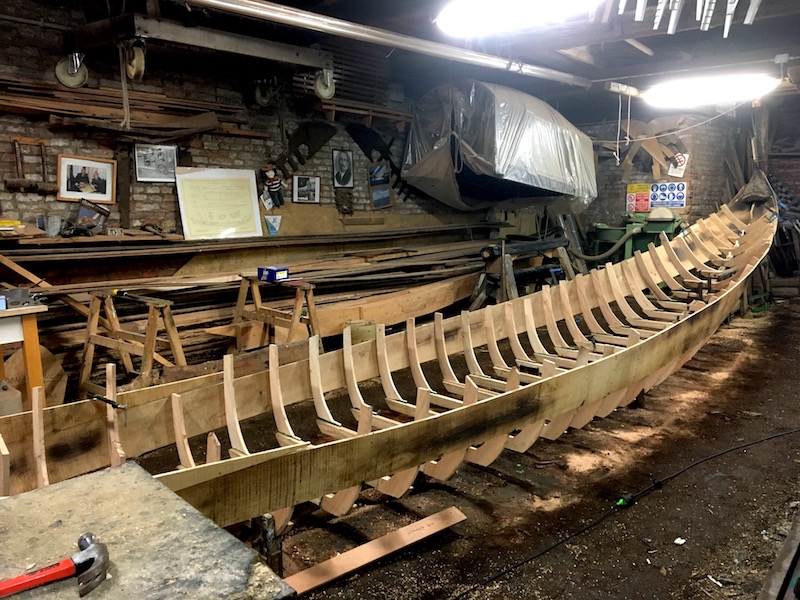 Roberto likes it when his gondolas stay in Venice, that way sooner or later he will see them pass.  He always recognises his own creations, from the waterline, its stability during windy weather and the unmistakable signature: two large triangles and three small ones carved on the chain on the aft. 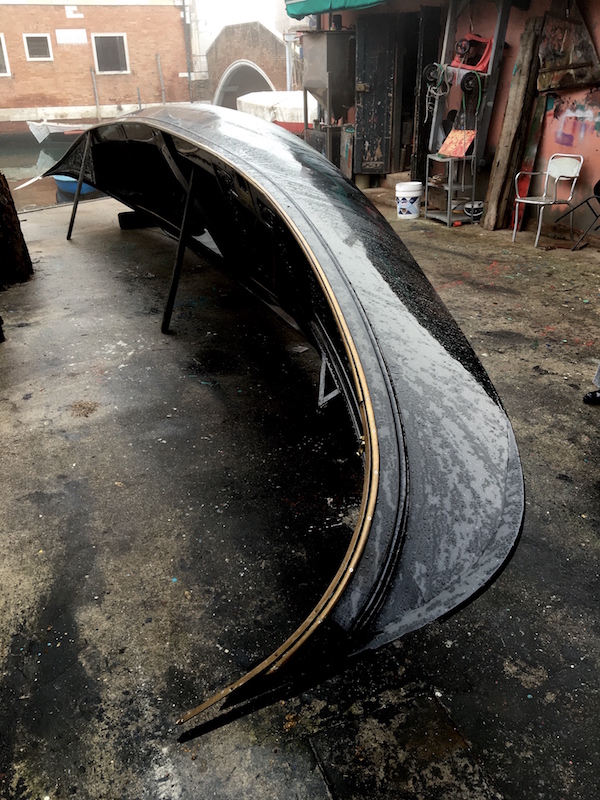 How long does a gondola last? “Longer than a marriage” replies Roberto. In the past gondolas lasted 15 years.  Today with constant maintenance they can last up to 50 years.

“A gondola is like a beautiful woman in an elegant black Armani dress, with minimal make-up and a small diamond. An authentic beauty that is impossible not to admire.“